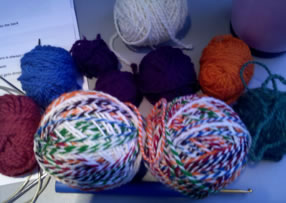 Do you have handspinning questions? Are you looking for answers? Don’t worry, Ms Spinster understands and is ready and willing to answer any questions. How do you think she came to be nicknamed: PatsyZ Most Excellent Spinnin’ Guru. Calm

For help write to Patsy at spins(at)spinninguru.com. Your question and her answer could be posted on this web page.